UP student organisations have their own clubhouse 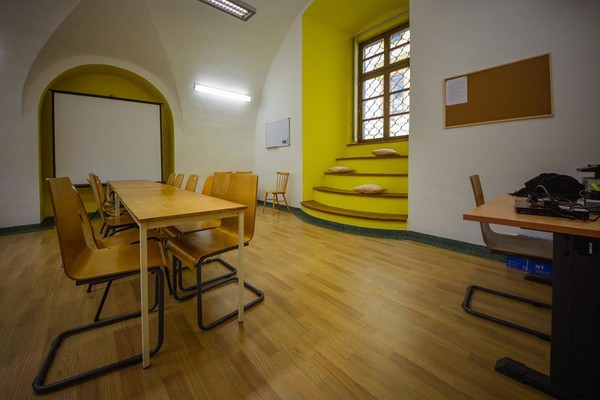 At Palacký University at present, there are about thirty student organisations and associations, uniting hundreds of active students throughout UP’s eight faculties. The majority of these, however, have lacked their own premises to date. This has changed, for as of February, UP management has opened the UP Student Club.

“The idea of starting a UP Student Club goes hand-in-hand with the long-term effort on the part of student organisations regarding mutual cooperation, help, and collaboration on new projects in the university environment. The possibility of realising the creation of a shared space used by student organisations for developing their activities suggested itself last year after freeing up one of the former computer rooms on the ground floor of the UP Central Library on Biskupské náměstí (Bishop's Square),” said University Vice-Rector for External Relations Petr Bilík, describing the creation of the shared space for active students. With the support of Rector Jaroslav Miller and the City of Olomouc, renovations of this space were made possible in autumn 2017.

Representatives of student organisations can decide for themselves how they will make best use of the UP Student Club. The Club space is primarily used for organising meetings and training sessions for members, screenings, workshops and thematic lectures. “At the Club, organisations have basic technical equipment at their disposal, such as a data projector and screen, Internet connection, and printer. There are also meeting areas, bulletin boards, a flip chart, relaxation zone and lockable spaces for storing materials,” said Coordinator of the UP Student Club Zuzana Řezníčková, enumerating the furnishings of the room.

In cooperation with the Student Career and Counselling Centre and the UP Communications Office, regular lectures and workshops will take place here aimed at self-development and supporting student initiatives. The facilities are also shared by the UP May Celebrations committee and the Park in the Park! initiative.